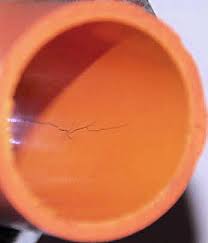 More than often, we hear back from our customers –

“We have been doing this for 20 years and this is the first time we came across this problem.”

“We told them to follow the process conditions we recommended, but they never do!”

“We saw this happen in the third shift, but no one in the first two shifts reported any issues with the same lot of material”.

“We want to confirm that we sent them the right material and that it is not our fault if parts fail”.

“We specified 33% glass filled Nylon 6, and the molder claims that is what they used. We measured the amount of glass fibers and it seems they are using the right material”.

“We do not know, but the extrusion pressure first increased slowly and then very rapidly. We had to shut down the line”.

“No matter what we do, we cannot fill the mold. We had to use higher temperatures”.

“Our internal QC indicated that parts were good. We shipped the parts and half of them broke during shipment”.

“We have not changed anything except for the supplier of color concentrate”.

Plastics parts fail for a variety of reasons. Failures could be due to applied mechanical, chemical or thermal stresses. Some failures are predictable and others are not. Some parts fail soon after parts are produced, some fail during shipment, some during storage and some in service. Failure of parts in service can be a huge liability, so it is critical to detect the cause of failure early on. Sometime failure is apparent, but sometime it takes extensive effort to detect it. In some cases, part failure manifests as visible cracks or crazes, undesired colors or odors, sticky surfaces, dust collections, poor elongations, loss of clarity, appearance of black specs, visible fish eyes or gels, too high or too low melt viscosities, loss of stiffness or elasticity, brittleness, failure to fit, snapping at joints, undesired part shape distortion, increase or decrease in surface hardness, apparent streaks or stripes on the surface, fogging, clouding or chalking of the surface.   Sometimes the material fails to process or becomes unsafe to process.

Over the years we have conducted nearly 150 failure analyses. Each failure is unique in nature, however, failures usually occur for one of the following reasons:

Failure analysis is a detective investigation and requires a broad skill set. It can be very gratifying, but also very frustrating. Even though we approach each project differently, there is a general approach we take.

Background: Before starting to analyze the failure mode, it is extremely important to collect as much history of the part failure as possible and to speak with the resin supplier, convertor, and user in order to accurately gather and record all information available. It is important to know of any changes in materials, processes, procedures, operators, tools, machinery, machine configuration, auxiliary machinery, environment, inventory, time when parts are made, packaging material, and shipping methods. It is also important to know if this is a first time occurrence, routine occurrence, or random, periodic occurrence. Is the failure repeatable ?

(1)   Obtain failed as well as good parts. This is very critical. Without having the actual failed part, failure analysis cannot be conducted. Representative parts must be received close to the time when the failure occurred. Parts should be handled with the same care as would evidence from a crime scene.

(3)  FTIR – doing ATR on the surface or on the melt pressed film can help to determine if the right grade was used, if there were any molecular changes due to degradation, presences of any unwanted contaminants, time and heat induced migrations and loss of additive, or changes in interfaces between additives and polymer during processing or use.

(4)  TGA – TGA can be used to determine if the right amount of ingredients are present and if the resin is the same as specified.

(5)  DSC – DSC is used to detect effects due to changes in processing conditions, chemicals.

(6)  Physical testing: Measuring critical dimensions to see if the part has shrunk or warped. Determining the density of part or sections of the portion close to and away from the part can determine if it has a uniform composition or if there is a presence of voids in the core.

Cracking of injection molded chair base
Background: Bright color chairs made for kindergarten with metal legs fastened via screws and bolts were failing during shipment or ...
Read More

“Since 2003, Transmit Technology Group supported Borealis activities in North America for our Daploy High Melt Strength PP. Over the years the relationship has strengthened as has the trust we place in their technical abilities and market knowledge.”
– Jason Titton, Sales Manager, North America, Borealis, Belgium
View All